Pityriasis is a genus of non-pathogenic yeast-like fungi which produce fine spores but no mycelium. It proliferates in “Dandruff ‘ and ‘Seborrhoeic Dermatitis’ and in the diseases/ conditions discussed herein – prefixed Pityriasis

Seborrhoea may be defined thus: ‘excess sebum for a specific individuals age and sex’.

Pityriasis can be a chronic inflammatory papulo-squamous disorder patterned on the sebum-rich areas of the scalp, face and trunk.  It presents as areas of erythematous skin covered by large yellow greasy scales.

This paper seeks to mention the pityriasis conditions which may respond to trichological therapy. Other manifestations requiring dermatological advice are also mentioned herein.

The aetiology of seborrhoeic dermatitis remains uncertain, but evidence points to genetic factors. At birth sebaceous glands are tiny and inactive, but sustained by maternal androgens. As puberty approaches androgen levels rise and sebaceous glands enlarge to commence sebum production.

Sebum production is initially similar in adolescents (either gender), until after the 16th year from which time the male’s production rises and remains higher (subject to the presence of testicular androgen) until advanced age. Female levels of sebum reduce with the presence of oestrogen, except during pregnancy.

At puberty and beyond sebum gains higher levels of cholesterol and lipids.

Cholesterol is a sterol (steroid + alcohol). It plays a central role in many biochemical processes.

Lipids are organic compounds (containing hydrocarbons) found in cell membranes of all body tissues. They may be used for energy storage, as structural components of cell membranes, others are important hormones or contain essential fatty acids.  Because they consist mainly of carbon they are soluble in ether and chloroform but relatively insoluble in water.

Squalene (a lipid) – is a key intermediate in the biosynthesis of cholesterol and precursor to the whole family of steroids derived from it. At puberty cholesterol and squalene levels dramatically increase in the sebum.

Seborrhoeic dermatitis is a worldwide disease, however opinions exist as to its relativity to racial and climatic factors.

Conditions prefixed Pityriasis which involve scalp crusting or exfoliative activity may be injudiciously labeled innocuous dandruff, but may be early symptoms of other diseases or disorders requiring specialist treatment – including:

Where doubt exists, early advice should be sought.

In a simple context this will allude to Pityriasis Simplex Capitis (syn. pityriasis sicca) – a non-inflammatory scalp condition which presents as exfoliation of the Stratum Corneum (outer layer of epidermal cells) with Pityrosporon Ovale (bottle bacilli) present. Pruritis may co-exist. It is common to either gender and shows no affiliation to skin colour.

Human skin continually manufactures and sheds cells. Clothing assists in the shedding of body cells. Hairy skin may retain these exfoliated cells for longer which articulate to form scales.

PSC may be an indication of a more serious condition.

This condition is frequently observed -photo is considered unnecessary

P.A. seems to originate from a moist eczematous exudate which hardens into a thick asbestos like crust which is adherent to the scalp and grows up local hairshafts. Occasionally blood is drawn where crusts are torn from the scalp.
Its silvery grey / white asbestos like appearance is due to its composition which includes hyperkeratosis and follicular keratosis.
As the scale is removed, areas of baldness which may or may not support future hair growth are revealed.

Coal tar and salicylic acid as a keratolytic to soften the crust and enable its removal followed by mild topical steroids where indicated.
Where psoriasis is a suspected complication, regular treatment may be needed.

Lesions may affect the buttocks, torso, face, and lower extremities (feet and ankles).
The scalp is rarely inculcated.
It shows no affiliation to race, colour or gender. Lesions tend to become apparent during the second – forth decades.`
Sardinians record an onset in children aged 3-7yrs. The elderly may also be affected.
P. Circinata may be classified as Idiopathic (Unknown origin).
Autosomal dominant inheritance is also likely. 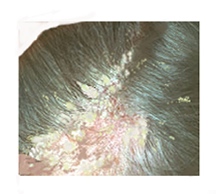 Pityriasis Steatoides (Classic Seborrhoeic Dermatitis) The condition may be intermittent, having an active and inactive phase.

Activity may be increased in winter and early spring, with remissions commonly occurring in summer.

Odour may co-exist. The scales have a yellowish appearance with a waxy/sticky texture.  The underlying skin may be erythematous (pink/red).  There may be a visible boarder exhibiting similarities with Pityriasis Circinata.
Sufferers include residents in hot humid climates and those who perspire heavily. Excessive production of sebum aids fungus proliferation.
P. Steatoides affects the scalp, the nose, ears, eyebrows, pre-sternum and intra-scapula.

Presents as a mild exanthema (a disease accompanied by a skin eruption) at any age (predominantly during second to fourth decade).

Some suggest that the elderly and very young are immune.
Hyper/Hypo pigmentation may be present especially in dark skinned persons.
Typically a 1-2cm oval red lesion (“herald” or “mother patch”) forms on the chest or back. The centre may have a wrinkled texture and is often salmon pink. Scales may be present.
Within 2 – 21 days, numerous smaller oval pink lesions may appear on the limbs, neck and torso where it often resembles a fir-tree in shape. In rare cases the face is inculcated.
Females are more susceptible to the disease.
Confusion with ringworm may exist.

Diagnosis is assisted by skin biopsy or blood test. Recurrence is rare.

The condition is not considered contagious or symptomatic of internal disease.

A common non-contagious skin disorder caused by excessive production of Pityrosporum Orbicular (Malassezia Furfur) a yeast present on normal skin. It is common in hot humid climates and in persons who perspire heavily.

PV affects the neck, torso or the whole body.

The condition is temporary but recurrence is common.

Confusion with psoriasis and ringworm is alleviated by biopsy. PV fluoresces yellow-green under Wood’s Light.

Treatment:  Ketoconazole, Selenium Sulphate, Zinc Pyrithione. Coal Tar shampoos may assist in the management of the condition. Sunbathing may hide the condition.

Professional diagnosis should always be sought.

PLC and PLEVA may affect either gender at any age. Adolescent males are more susceptible. The torso thighs and arms (inner, upper region) may be affected.

The scalp and face are rarely inculcated.
P.Lichenoides may last for months or years. Fever may co-exist.

Pruritis and crusted lesions that may blister similar to chickenpox.

Cicatrices (scar tissue) may occur. Mouth ulcers may be present. The condition may be confused with chicken pox or shingles.

Pityriasis Lichenoides is idiopathic. No specific virus or bacteria has been implicated. Hypersensitivity to a micro-organism may contribute.

A skin biopsy may assist diagnosis.

presents as white or light pink round/oval lesions of approx. 1-4cm). Scales if present are fine and adherent. Examination may reveal lesions with raised margins. Temporary hypo-pigmentation may occur. Children with darker skins in tropical countries are most vulnerable. There is no obvious link to race. Lesions may worsen during warm weather. Most cases resolve within a year.

Classified as idiopathic. No conclusive link to bacterial or viral infections currently exists. Exposure to sunlight may be a factor.

Hypo-pigmentation may be caused by Pityrosporum Ovale (yeast), other idiopathic disorders such as vitiligo, or it may be a reaction to some medication e.g. benzyl peroxide, retinoic acid and some topical steroids.

Pityriasis Rubra Pilaris (PRP)
a chronic papulo-squamous disease (a skin eruption composed of papules and loose scaly lesions), characterised by a reddish/orange patchy rash on the scalp, chest or face, which may extend to other regions elbows and knees or the entire body. Erythroderma (abnormal redness of the skin), scaling and loss of hair may co-exist.

May be inherited (from early childhood) as an autosomal dominant trait or as a sporadic manifestation. Nail shedding/deterioration may be evident. Both genders are affected. There are no suggested race links.

PRP may be confused with Psoriasis.

An idiopathic condition. Burns, rashes and infections may trigger the onset.

Biopsy is a positive diagnostic aid.

Classical adult type;
The most common type of PRP. At onset, a scaly patch is exhibited on the scalp or upper torso. Further patches may appear within weeks, which tend to cause red lesions at hair follicle sites. Palms and soles thicken and fissures develop Scales on the scalp thicken.

Circumscribed juvenile type;
Affects the elbows and knees presenting follicular plugs surrounded by reddened skin. Patches may appear on the scalp and body especially in pre-pubertal children. It may not show remission until late teens.

Atypical juvenile type;
An hereditary condition. Characterized by prominent hyperkeratosis (formation of excess keratin on the surface of the epidermis) on the soles of the feet linked too poor bone development, and frequent erythema.

Seborrhoeic dermatitis may be related to androgen production, which may explain why the disorder often appears and disappears in infancy before recurring at puberty. In infants maternal androgens are thought to stimulate the sebaceous glands. Changes in free fatty acids may play a role in the development of this disorder.

Malassezia: a yeast named after the Italian doctor who first described it. It is thought to contribute directly or indirectly in the development of seborrhoeic dermatitis.

Treatments;
The patient must be informed that the treatment for seborrhoeic dermatitis is often uncertain and may be lifelong.

Scale removal;
Hydration and exfoliation of the scalp by soaking with a mild water soluble keratolytic cream containing 2 % salicylic acid.
Coconut oil overnight is harmless and potentially helpful in extreme cases – more effective when occluded within a shower cap overnight.
The scalp is thereafter soaked and the crust removed by gentle grattage.

Shampooing;
This can prove a valuable treatment.  Daily shampooing in the early morning is helpful.  Shampoos recognized to be selectively efficacious include: Zinc Pyrithione (ZPT), Ketaconazole 2%, Coal tar products. Alternating a coal tar shampoo may be helpful.

Medication:
Topical corticosteroid can be used: creams, sprays or lotions.
Potent topical steroids may be effective, as a short term therapy., thereafter to be discontinued to avoid steroid induced atrophy of the scalp.

Some acute forms of seborrhoeic dermatitis on the face and trunk usually respond to mild steroid ointments e.g. Hydrocortisone ointment (1%)

Where the above regime fails systemic steroid may be required. Systemic antibiotics are used in cases of secondary bacterial infection.

Prognosis;
Seborrhoeic dermatitis is a chronic condition which can be managed with treatment. Cure is not a word to use although the condition may remain inactive for long periods.

Symptoms: innocuous greasy, yellow, scaling commonly seen on the vertex during the first few weeks of postnatal life. It is believed to signify persisting Vernix Caseosa. Crusting may cover the scalp.The crusts may become flaky and rub off easily. Pruritis is rare.
Babies may develop mild redness of the eyebrow region and nasal labial folds.
In infancy maternal androgens continue to stimulate the sebaceous glands. Free fatty acids may also be inculcated in the development of this manifestation .

This harmless condition tends to improve spontaneously at around 10-12 weeks.

Treatment –
Daily washing with a baby shampoo. If unsuccessful, light vegetable oil e.g. coconut oil left on the scalp for an hour or two, followed by a gentle shampooing with baby shampoo. In extreme cases a mild anti fungal cream e.g. Ketaconazole may be prescribed.

The condition usually disappears spontaneously but may re-appear in infancy.